Day three is a made for TV movie narrated by Vincent Price. Oh boy! I wonder who’s playing… 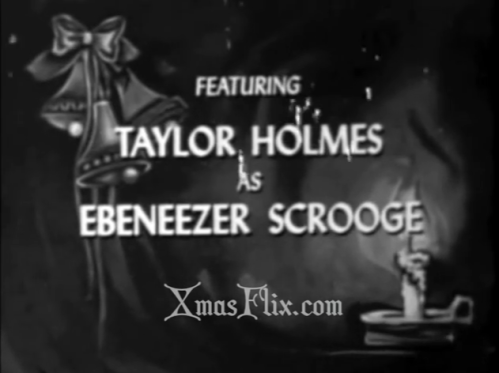 XmasFlix.com will be a very close friend of mine over this month. They seem to have almost every single non-commercially viable Christmas film uploaded to their YouTube channel and maintain an active but completely anonymous social media presence. I’ve no idea what they could be getting out of it other than satisfying a substantially deep, year-long fetishistic obsession with Christmas. That is, after all, why I’m doing this.

I’m guessing this was simply for convenience. After all, “The” is considerably easier to say than “A”.

Taylor Holmes’ Scrooge is bad, poor thing. Listen to how he manages to turn “be here all the earlier” into one syllable. It’s almost commendable.

The staging of that clip is fairly typical of the rest of the film. Flat and boring. Done in one take.

Never before have overacting and underacting been blended together so marvelously as when Marley’s ghost enters.

Low budgeted films like these can often lead to interesting directorial decisions; like the decision to have Marley explode whenever he passes through a door.

This is probably an allusion to Dickens, who used to explode when he passed through doors.

Vincent Price announces that Scrooge fell asleep without undressing. It’s a neat coincidence that that would’ve allowed them to get filming done in a day with only one set of costumes.

We then meet the Ghost of Christmas Past. I presume he’s standing behind this man dressed as Mother Theresa.

The screen fades to black and then we’re in the schoolhouse. At this point I feel the weight of terrible direction far overshadows any one individual’s bad acting. Scrooge is dispassionate and reacts weirdly to action, delivering a lot of lines like he has no idea what he’s saying.

For instance, he delivers the line “my playmates , they didn’t like me” with whimsy and, upon seeing himself as a boy, remarks that he regrets not giving some money to a caroler we heard earlier singing The First Noel. The good news here is that Scrooge is already reformed! The spirits did it one night! The bad news is that The First Noel plays a bigger part in this story than the Ghost of Christmas Present.

Speaking of which, Hello.

In this version Tiny Tim doesn’t get to talk much, only to say “God bless us, every one” and when he does everyone drinks and looks around like it’s really awkward.

At least it’s a change from all of the pretentious Tiny Tims who genuinely deserve to die.

They really hit on something with the sound effect transitions here.

It’s time for the future ghost. I wonder what cool lighting or camera tricks they’re going to use?

Well this is definitely the only version I’m aware of where the Ghost of Christmas Future is visibly shorter than Scrooge by several inches. And if nothing else this is technically the first western Ninja film.

It’s about this time that I realise that I haven’t seen Vincent Price in a while.

We miss Old Joe (thank god) but do get the bankers talking about the death of a mysterious gentleman (Scrooge is so stupid) and jump straight into the gravestone reveal. It’s all academic of course because Scrooge reformed 40 seconds after meeting TGOCPast. We cut to him sitting up in bed (filming him lying down would have required maneuvering the camera between the bedposts) and we get this fun laugh:

Either he’s very happy or about to commit suicide. Whatever happens I’m just glad he’s confident enough to share his feelings.

We then go to the Cratchit’s house and Fred is there too I guess. Scrooge turns to Tiny Tim and says he’s going to give him surgery but Tiny Tim hasn’t to this point actually shown any signs of disability. If anything his freakish height seems to indicate almost superhuman vigour.

Wondered if the title card was a typo?

Wrong, bitch, this production had a systematic misunderstanding of the letter E. You’d think adapting from a book would make misspelling the name of the main character extremely difficult. Wrong again.

This was a bad adaptation. Cute and campy but I can safely say it is not Superior.

I give this 3 extremely mighty Tiny Tims out of 10

3 days in and I’m already starting to get tired of the story. I’m sure this will pass.