Right, this one is really, really good.

When people talk about their favourite version of A Christmas Carol it’s invariably the 1970 Albert Finney musical, the version The Muppets did or this. Having sat through three adaptations in a row I was skeptical how you could execute the story well enough for it to be definitive. Surely it’s just hitting the beats with an acceptable level of technical competence? That’s what the 1935 and 1939 versions did and they were fine.

But Scrooge (1951) doesn’t do that – it is not a straight adaptation and is largely not faithful to the source material. Instead, it takes the basic elements of the original story and twists them into fun, creative shapes.  It treats Scrooge like a human being and not a cartoon character. It’s just really, really good.

I wondered how long it’d be before we got to the first Noel.

Look at that deep focus. It’s so pretty and this is just the first shot!

Going to get on my wanky high horse and start comparing this to Citizen Kane. It almost feels like the similarities are deliberate – both films use deep focus extensively, both use striking, expressionist cinematography and both follow a dispassionate businessman who left his friends and family behind in pursuit of wealth and glory.

Usually Scrooge’s past is glossed over; he was a lonely schoolboy who traded bonhomie for bond equity (nice – Ed), but Scrooge (1951) fills in the gaps in wonderful, unexpected ways that give Scrooge’s character such depth and texture that I have no idea why other versions didn’t adopt what happens here as the new Canon.

We spend a full 30 minutes – more than 1/3 of the total running time – with the Ghost of Christmas Past. Seven new segments are added that flesh out Scrooge’s relationship with his sister (Fred’s mother who died in childbirth) and Jacob Marley. We are actually shown Scrooge being a ruthless businessman rather than just a) being told he is and b) having him wish the poor to die. Even his reluctance to participate in charity is justified during a scene where we learn that he was traumatised by the death of his sister.

“One must stele oneself to survive [modern life]. Not be crushed under by the weak and infirm.” he says to a young Robert Marley in the scene immediately after her death.

The film is not so much about Christmas as it is about Scrooge’s redemption arc. It just so happens that his redemption arc coincides with the Christmas. I cannot overstate how important this is to the interpretation. Scrooge does not hate Christmas, he is indifferent to and bemused by it.

“Christmas has even less to do with it, my dear sir, than your wife has or l have. You still owe me twenty pounds and you are not in the position to repay it if was in the middle of a heat wave on August bank holiday. Good afternoon.”

Scrooge is intelligent, sarcastic and witty. His grave/ gravy joke should be a natural tell for this but Alastair Sim is the first Scrooge so far to deliver it while not sounding like an alien. Scrooge is a political animal and fully self assured in the conservatism that feeds his downward trajectory. You can feel Dickens’ contemporary satirical edge here when Scrooge wearily corrects the chuggers, stating that his taxes pay for the institutions designed to support the poor (workhouses, debtors prisons) and that those are sufficient. He is less of a miser and more of an Adam Smith Institute sanctioned neoliberal.

“The world, that can be so brutally cruel to the poor, professes to condemn the pursuit of wealth in the same breath.”

That could almost be a tweet by Daniel Hannan. 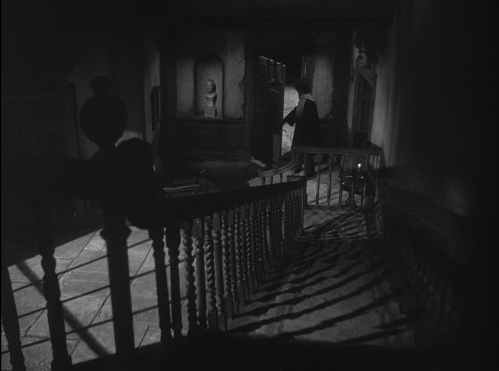 Look at the way the direction of the lighting and the placement of the staircase draws your eyes to Scrooge who’s positioned quite non-naturally in the northeast of the frame.

This is also the only Marley so far that remotely approaches being terrifying. I suggest skipping to 3.40 in the clip below.

I’m going to draw another Citizen Kane parallel here; during TGOCPast we learn that Mr Jorkin, pictured below on the left, wants to first buy Fezziwig’s firm. He is unsuccessful but then manages to recruit Scrooge after flattering his intelligence. Scrooge’s relationship with Fezziwig, his trusted and benevolent employer, is ruined forever.

Remember the bit Citizen Kane where Charles continually forfeits family for wealth in the name of ambition? The difference here is that Scrooge’s failures in life are entirely of his own doing and were not set in stone from his youth.

The scenes where Scrooge witnesses his sister dying and where he undercuts his old firm to turn a quick profit are so rich and well executed that I’m including them in full below. I hope you appreciate that I had to individually convert them from mkv to mp4 then painstakingly edit, upload and embed them just for this.
They’re short and I recommend you watch them.

The dialogue is tightly written and delivered well enough that you can’t really hear the (sometimes) distracting Dickensian verbiage. This is the only adaptation so far to do that.

Christ, I haven’t even touched on half of what makes this incredible yet. Remember early on in the story when Scrooge asks Bob Cratchit
“I suppose you’ll be wanting the whole day off tomorrow?” and Bob replies
“If it’s not inconvenient”?
Well in this version they’ve been having that same exchange every Christmas for years. Ebenezer checks whether or not Bob still insists on this very silly idea while Bob nervously treads around him. It’s almost a ritual. It’s such a simple addition that adds so much depth to what is nominally a throwaway line that it makes me want to give up Chradvent four days in. That and the brain ache.

Consistently throughout the night Scrooge shows small signs of regret before going back to insisting that he is too old to change, that he is tired and that he wants to be left to keep Christmas in his own way. His remorse builds naturally with each visitation and the gravestone is only a tipping point rather than the set piece of Scrooge’s rehabilitation.

Despite the Ghost of Christmas Yet To Come being just a man in a black veil I still believe that Scrooge is more scared of him than any other spirit.

The brilliant way in which he is introduced somewhat mediates the lackluster costume.

Remember the Old Joe segment and how I hate it? Yeah well guess what, it’s really good here. For a start, it’s fairly clear that Scrooge is aware of who they’re talking about throughout (did you know? it was him!).
Secondly, instead of the three skivs being generic working class thieves, they each have a distinct characterisation and relationship with Joe. The maid knows him well, the undertaker is out of his depth etc. The filmmakers also take a while to reveal exactly why they’re there, giving us a couple of minutes of fun as they establish themselves.

They even managed to make Tiny Tim’s speech about Jesus helping the lame to walk not totally shitty and pretentious. Also the Cratchit children drink gin throughout and eat boiled Christmas pudding if you wanted some indication of the libertarian hell hole in which Scrooge the AnCap would have us live.

As I mentioned in the intro, the very important message to take away from this is that when you are adapting a property,  it’s probably far more worth your time to focus on translating it for the medium for which it is intended rather than simply copying the text. Scrooge (1951) plays fast and wild with the original but is, I imagine, exactly how Dickens would have wanted Scrooge to have been portrayed provided the man himself didn’t have a crippling fear of deep focus. He died in 1870 so we’ll never know for sure.

9 fucking awful boiled puddings out of 10

I’d say this only loses points for not making enough use of the Mechanical Victorian Dolls, so torturously teased in the opening credits.

Side note: I’m having to be fairly brutal with what I pick for this month and am missing out a film from 1938 notable for featuring a massively fat Bob Cratchit. This depressing compromise was alleviated by only finding out about it well after I could’ve had a look at it, per rule #2 of Chradvent. There’s a thin blue line separating society from chaos and I intend to respect it.