Today was difficult guys, I really, really felt it. I put it off right until the last moment. I won’t keep you in suspense – it was good – but right now it feels like it’s the only story in the world. And I’m barely halfway through. No matter. Onwards.

We start with some narration, but not with “Marley was dead to begin with”. An odd choice because it’s specifically the only line in the entire piece that works when narrated. Never mind. Who’s in this? 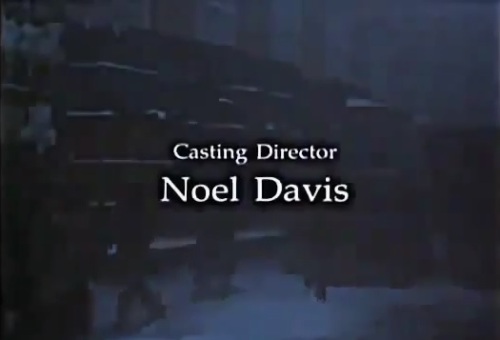 Aaaand SCROOGE! No messing about. Here he is. A nice, totally original exchange with Bob that establishes his character succinctly.

I may end up clipping quite a few good bits in this post, so pay attention will you?

This Scooge is another one of those Scrooges who isn’t a miser. He’s a sarcastic businessman and is so far the only Scrooge who delivers this line as a joke:

“Every idiot who goes about with ‘Merry Christmas’ on his lips, should be boiled with his own pudding, and buried with a stake of holly through his heart.”

A fresh take! This has the advantage of making Scrooge feel like a human being. We begin, then, to see a pattern here. Films that treat him like a cartoon character (with the exception of the cartoons) are less good than those that don’t.

The actor who plays Fred is very good. His speech about Christmas that usually ends with

“I believe that it has done me good, and will do me good; and I say, God bless it!”

is not delivered like he’s humouring his Uncle but instead as an earnest, passionate defense of family and Christmas. “Come. Dine with us tomorrow.” Like it’s the least Scrooge could do. Fred is completely confused as to why Scrooge doesn’t like him. They even add a line in at the end “Why can’t we be friends? We’ve never had a quarrel so far as I know.” Lots of nice, subtle touches that hint at a deeper, complex relationship. He leaves upset. This, I will say now, is the most Superior depiction of Fred. I think him and the guy from the fucking awful 1954 version should fight.

Tiny Tim is introduced early. This was a good decision. In the book he isn’t introduced until halfway through Present and some earlier attempts to add in a line where Fred wishes Bob and Tim well usually feel forced.

Scrooge heads to the stock exchange and, like in 1951, is shown to do business. Some gentlemen approach him about buying a warehouses full of corn (?) and Scrooge upsells them confidently. He’s established in-film to be a money changer so I have no idea what he’s doing with a warehouse full of surplus corn. Maybe it’s cheaper to throw on the fire than coal.

We meet the chuggers at the exchange, another nice, natural change, and once again Scrooge’s “surplus population” line is read to be a weary, dismissive opposition to the taxes he is forced to pay to support the workhouses.

We then spend a bit of time with Bob and Tim to establish Tiny Tim’s disability. There’s a lot of footage of people using their legs, running around using their legs, having a fun time with their legs etc. They put so much emphasis on other people’s legs it feels the kind of like really specific fetish writing where you can tell the author had a thing about glasses.

Now it’s time, yet again, for the part of the film with the Marley knocker. Every day feels the same. Now I know how Bill Murray’s character felt in Groundhog Day and, to a lesser extent, Erik von Detten’s character in Christmas Every Day. Actually maybe to a greater extent. 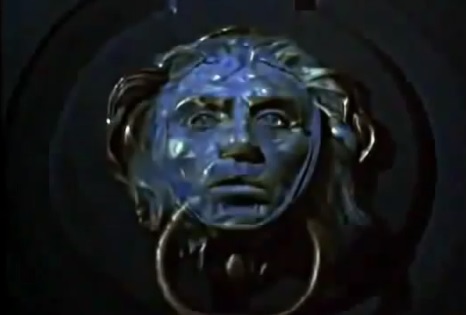 There are two ways to do the Marley knocker that I’ve seen so far. Either they superimpose an image of the actor’s face over the knocker or there is a physical morph. Most films go for the superposition with almost no difference in technique between here and 1935.

There’s a lot of build up to Marley’s appearance. Maybe too much build up. We spend a good six minutes in the company of strange noises and tense music. (Side note – this is the first time where I have actually noticed the incidental music. It’s very good and is employed to great effect consistently throughout the film.) 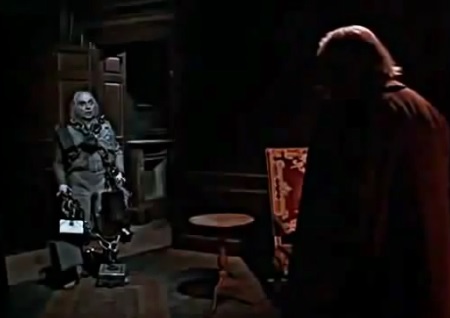 Marley appears. He is the first Marley to unhinge his jaw, as per the book, and the effect is unsettling. All done through acting as well! No special effects here.

Hmm. It looks a lot sillier in gif form.

Some Marleys promise spirits at 1 o’clock, 2 o’clock and 3 o’clock and others promise  ghosts at 1 o’clock and then 1 o’clock the next day and so on. The second is what Dickens wrote, the first is what makes sense. Time travel as we understand it today wasn’t really a fully formed idea in 1843 so the way Dickens navigated the issue might not make immediate sense to our brains. This, I feel, is one thing that a film version of the story could bring to a modern audience. If you can recontextualise the ideas to more easily communicate the message of the story then go for it, Buster. 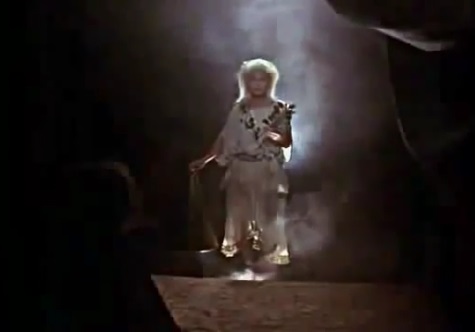 Scrooge is given the most detailed backstory yet: his mother died during childbirth and he boards over Christmas because his father resents him for it. We then meet his father, Silas Scrooge, for the first time. We never find out if Fan died in childbirth like her mother but we still draw a quick parallel between Scrooge and him and Scrooge and Fred. How “Little Fan” managed to be born despite being the younger sibling is never addressed.

Lots of nice subtle bits of dialogue. Silas Scrooge talking to his children:

In this version it was Silas who got Scrooge his apprenticeship with Fezziwig. This film does a good job in linking the vignettes across time skips. For instance, we later find out that the job Bob finds for Peter Cratchit came about through Fred. I think this kind of thing is called film making.

I like this Fezziwig because a) he gets some dialogue and b) he doesn’t look like Eggman.

Belle jokingly accuses Scrooge of being too serious and Scrooge remarks that he doesn’t feel worthy enough to be with her and won’t until he has the means to support her financially. This is nice. Later, when she breaks up with him he is clearly now a workaholic but still not yet the miserable neocon we meet at the beginning of the film. 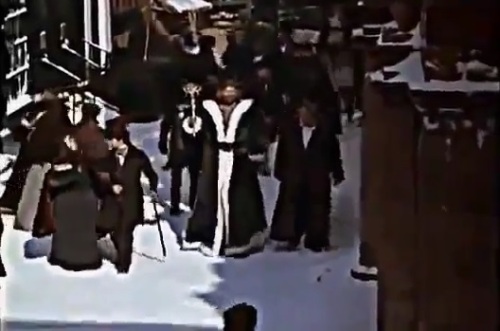 Funny moment at the Cratchit house when Scrooge joins in saying grace.

Tiny Tim’s “god bless us” isn’t totally shitty and pretentious and it even charms Scrooge a bit, leading to my favourite speech of the film:

Really great scene between great two actors at the top of their game.

During Bob’s toast of him, Scrooge says:

“He’s made a point Bob Cratchit has. Without me there’d be no feast; no goose at all. My head for business has furnished him with employment.”

He’s technically correct, of course. The Spirit simply says “Is that all you’ve learned from observing this family on Christmas Day?” and Scrooge’s muted response suggests that it is not and is a really excellent way of foreshadowing the completion of his character arc. 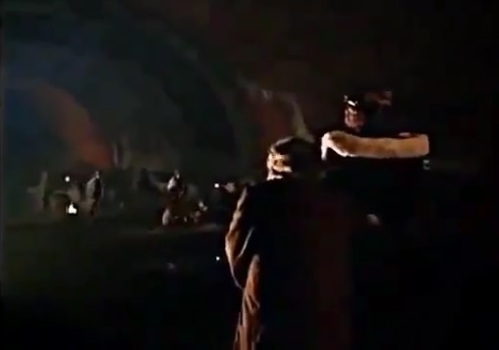 We get a new scene here, an impoverished London family living off scraps. Scrooge is directly confronted with effects of his Classical Liberalism. He is outraged by what he sees and says

“Have you visited any of them, these institutions you speak of?”

It seems there are two ways to do the Ghost of Christmas Present. Either jolly Father Christmas or discourteous giant. I like Edward Woodward’s large rude man best.

The introduction to ignorance and want is my favourite yet. We are reminded that Present is a spirit and has no corporeal presence. 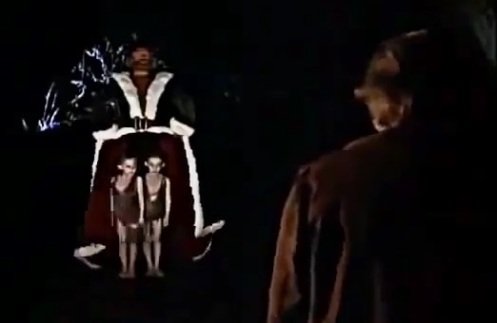 Nervous half-smirk when his “workhouses/ prisons” line is thrown back in his face.

He’s slowly learning. We never see this process as clearly as we do with George C. Scott. He admits his mistakes and actually tries to negotiate with Present when abandoned. He is a man now willing to change.

What a fucking cool introduction to the Future Ghost. For the first time, you really understand why Scrooge might be scared.

We’re taken to the stock exchange and hear the businessmen talk about someone who’s recently died (I wonder who?). Because we were introduced to both them earlier the scene is given renewed context and its placement in the film is better justified.

Liz Smith! She alone lifts the whole Old Joe scene which is, mercifully, shortened. Halfway through Scrooge sees his watch and goes into total denial. It can’t be him. It’s a coincidence. No. He asked to see some emotion around this man’s death and all the spirit has shown is greed and avarice! The irony is not lost on the audience. 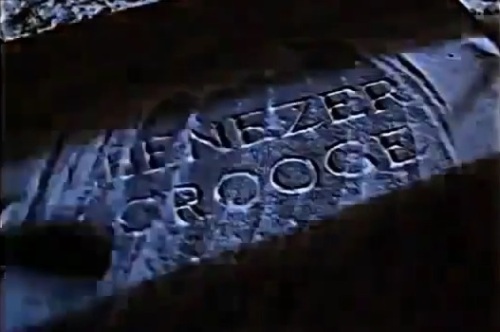 That gravestone is still in the graveyard in Shrewsbury where they filmed it. St Chad’s church. Go along and see if you can find it. 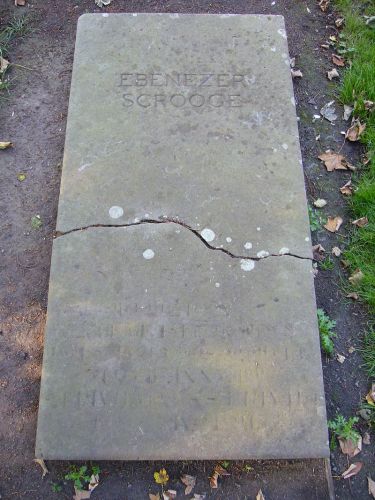 He wakes up etc etc. He orders the Turkey to be delivered to Bob’s house and, when asked who it was from, replies “I wish to remain anonymous.” Aha! A callback!!

We’re shown the Cratchit’s receiving the Turkey for the first time and my god does Tiny Tim look ill.

He looks like one of the kids from Akira.

Scrooge spends lunch with Fred and we are treated to Scrooge apologising to Fred and his wife in a scene that really cements this as my favourite Fred/ Scrooge relationship yet.

Bob comes in late the next morning, of course. I much prefer this to versions where Scrooge goes to the Cratchit house on Christmas morning, it all feels much more like something he would do. Scrooge tells Bob that he’s 18 1/2 minutes late.

Is… is that a reference to Rich Little’s Christmas Carol? It almost certainly isn’t, but my god, if it was…

It struck me at this point that Bob isn’t really much of a character. He’s basically a bit part in a story that has no real secondary character. It’s just Scrooge and several people that he knows. Bob exists to have his salary raised and to be Tiny Tim’s father, really, and many versions don’t really know what to do with him.

The narrator comes back for the last couple of lines. The narrator is another role that many adaptations struggle to work around. It is one thing for which I will give the Muppets credit.

We finish on the same closing shot as the 1951 version. Cute.

Altogether then, really strong. What struck me, having watched 10 previous A Christmas Carols in a row, is that while this hit all the same story beats as the others it felt very fresh. Gotta applaud constant use of reintroduction, sharp funny dialogue, and pathos.

Like many this film is guilty of Scrooge feeling like a completely different character on Christmas Day. I understand this is sort of the point but it’s almost like he’s undergone a complete personality purge. There is nothing left of his pre-Christmas Eve self. I suppose this cannot be helped but I wonder if any future versions will address it.

Best one since Alastair Sim for certain. Was trying to work out whether it was actually better but the striking cinematography of 1951 and Sim’s natural charisma just push it above the mark.