I have watched Blackadder’s Christmas Carol more times than I can count to the point where it’s lost all meaning to me. I know it line for line and have done since I was 15. I’m sure this won’t affect my judgement of it.

Whereas Scrooged was the first parody this Chradvent, Blackadder is the first to do it with an ironic twist (Rich Little does not count). As a TV special, we go in knowing the main characters already. The Edmund Blackadder of the past two series of the show is a cynical, cowardly opportunist who’d make a good candidate for his own Scrooge-like redemption. So we know we’re in for a treat when Hugh Laurie’s narrator says:

‘In the reign of good Queen Vic there stood, in Dumpling Lane in old London town, the moustache shop of Ebenezer Blackadder, the kindest and loveliest man in all England.’

Maybe it’s just a fever dream but does the set here look like the set from Rich Little’s Christmas Carol? 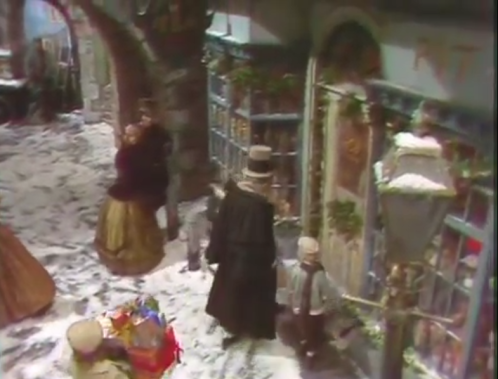 God, I hope it is a fever dream.

Ebenezer Blackadder bursts in with a “Humbug! Humbug! Humbug, Mr Baldrick?“. (As the lyrics to the theme song state, he’s sickeningly good). This is not the Blackadder we know and love.

Also like Rich Little, Baldrick manages to spell Christmas without any of the constituent letters, an achievement for which Blackadder commends him. (I spent many German lessons when I was 12 trying to work out how. The closest I got was Kwyznuz, which is how you spell Christmas in Russian.)

But how Ben, I hear you ask, do you sustain the established format of Blackadder when your main character is the complete polar opposite of himself? As you can see, Blackadder’s lines are broadly unchanged.

“I fear, Mr Baldrick, the only way you’d get a big wet kiss at Christmas, or any other time, is to make a pass at a water closet.”

I spent a while trying to work out what it was that Rowan Atkinson was doing. Whatever it was it was very clever. I think it’s a couple of things; the first he’s a lot more patient with Baldrick, whom he calls Mr Baldrick, always finding a positive spin and acting as as somewhat an educator, taking an interest in his activities. The second is that while a lot of Blackadder’s lines are mean spirited, Rowan Atkinson delivers them with complete innocence. You almost get the feel he’s not really saying them. (You can notice this during regular episodes of Blackadder too. Edmund will often insult General Melchett to his face and Melchett won’t hear him.)

Incredible how well this works, actually. How many other sitcoms could you completely inverse and yet not change the fundamental dynamics of the main characters? I think it’s a testament to Elton & Curtis as much as Atkinson, though I’m not sure it would work outside of the confines of this one-off special.

They con Blackadder out of his money, food and presents. They even take the Christmas Twig.

W-where was he keeping that?

The Royals arrive in disguise complete with footman.

They are on a mission to reward the kind and the generous and, as such, demand Blackadder hand over his Christmas turkey for the kind and generous old woman next door. There are no good reasons to be charitable in this world.

We never see our Marley, but Baldrick does.

‘Ooh, I forgot to mention, when you were out there, there was this enormous ghostly creature come in saying, “Beware, for tonight you shall receive a strange and terrible visitation.” I just thought I’d mention it. It come through the wall, said its piece, then sodded off.’ The Ghost of Christmas All Three is a grey-bearded Scottish alcoholic. Why? Why not.

Robbie explains that, while his job usually involves getting crooked misers to reform their ways, he just wanted to say stop by and say hello. How does Robbie make them reform? He shows them visions of their ancestors. This does bring into question how exactly showing someone their ancestors gets them to realise the errors of the ways but then this is borne out in the special as it has the opposite effect on Blackadder.

The little clips we get from Elizabethan and Regency Blackadder are nice little 6 minute condensed sitcom A-plots with all the faff cut out. They’re shallow but very good for what they are.

The third segment is set in distant future after Blackadder asks what his life would be like if he became bad:

That’s enough for Blackadder. He un-reforms and sets out to be bad. He starts immediately the next day with the intentional murder of a child.

(This is funny and it is what Blackadder would do but it represents a broader issue with A Christmas Carol; by the end there are literally no residual elements of Scrooge’s former personality left whatsoever. This is a bigger issue in the dramatic adaptations like 1951 or 1984 where the Scrooge we get to know effectively dies on Christmas morning. Maybe  Dickens just meant for Scrooge to be a metaphor without detailed characterisation.)

We’re confronted with Millicent, Scratchit and Beadle once more and each time Blackadder tells them, in a unique and charming way, to fuck off.

The way Rowan Atkinson delivers the line at the end of this clip specifically might be one of my favourite line deliveries of his ever.

I’ve seen this special 10, maybe 15 times and I still laughed at that moment.

The Royals come back, this time to offer Blackadder a peerage and £50,000. He doesn’t believe they’re the real deal and insults them out of the house. Despite the message throughout of “bad guys have all the fun” we are eventually reminded that this is not the case and the final shot is of Blackadder realising that that really was Queen Victoria.

A lesser sitcom would see Blackadder chase the Queen out of the house with a gag punchline.

This is the kind of neat, alternative retelling of the story that Scrooged so desperately lacked. It completely reinvented itself to suit the needs of the main characters. Less concerned with hitting the story beats as interpreting them. This is how you do pastiche.

I hope my pre-Chradvent knowledge of this one didn’t spoil the overall experience. The truth is, there’s not too much to write about. It’s very solid and the gags are great. If it had been as bad as Rich Little’s Christmas Carol I might have taken more issue with the contrived situations.

Also; the correct viewing order for Blackadder is:

The rest of Back & Forth.

I’ve experimented with this formula in marathon setting and using Back & Forth as a framing device really works. Best enjoyed with a casserole made from three beans and that one.