Kelsey Grammar stars as Ebenezer Scrooge in this film adaptation of the 1992 Alan Menken stage musical. The live show is still put on every year in New York and London, with previous Scrooges including Robert Lindsay, Tim Curry, Roger Daltrey and Frank Langella. If you’re thinking “ooh, that sounds promising” you’d be absolutely wrong because this musical sucks and is boring as hell.

A Christmas Carol: The Musical opens on a terrible CGI shot of London. 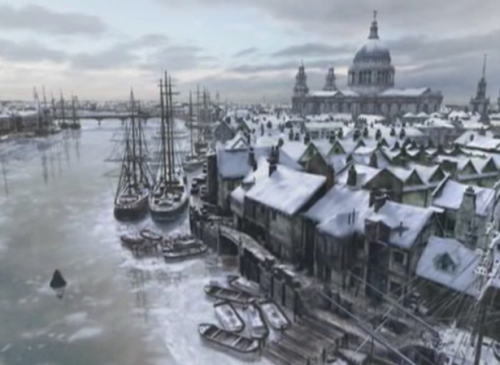 We get a long take of a busy city street and a 9 minute introductory musical number. Now, I’m a very big fan of Alan Menken but every song in this film is completely indistinguishable from the previous. Not only that, but they never stop singing. The result is that I have no idea how many songs there actually are. It could be 5, it could be 22.

You can tell this was a stage musical because everything takes place in a couple of large locations and every few minutes there is a long, uninterrupted dance number. It’s nice to get out of Scrooge’s office for a change.

Scrooge’s “let them die” reprimand to the chuggers is given more weight by Kelsey Grammer’s real life hard-right Republican politics.

Bob has a sneeze in this, and that really annoys Scrooge. “Every sneeze is a penny lost!” He says. What? Ok. It’s never mentioned again.

Kelsey Grammer’s Scrooge is campy, similar to Albert Finneys which makes sense as at the time it was the only non-Muppet musical in existence that wasn’t totally garbage.

Among the huge ensemble, three particular individuals sing a couple of lines each, making overt references to the words “past”, “present” and “future”. I wonder who they could be. 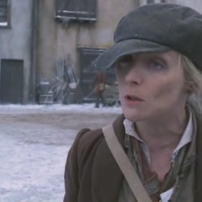 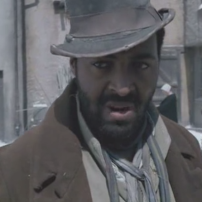 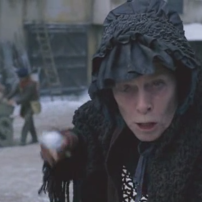 Scrooge is having a manspread when all of a sudden George from Seinfeld bursts through the wall dressed as Beetlejuice. 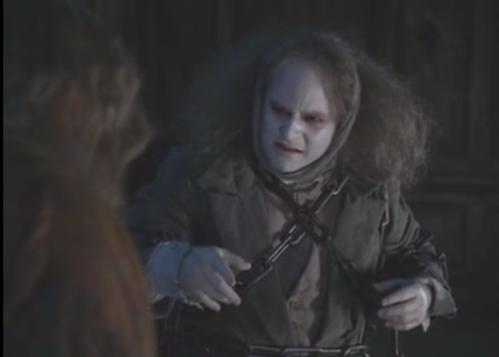 Niles, this is a costume party.

Another completely indistinguishable song, but at least we finally get to see what’s inside all those lock boxes Marley has. 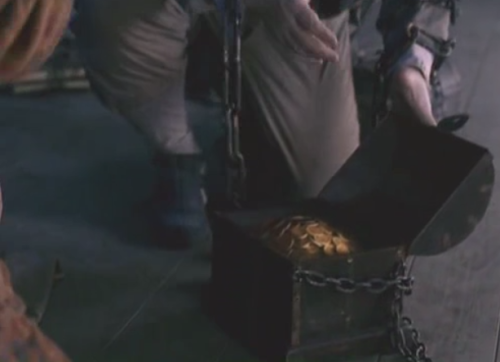 The Ghost of Christmas Past is Jane Krakowski. You might remember her from such films as https://en.wikipedia.org/wiki/Jane_Krakowski#Filmography 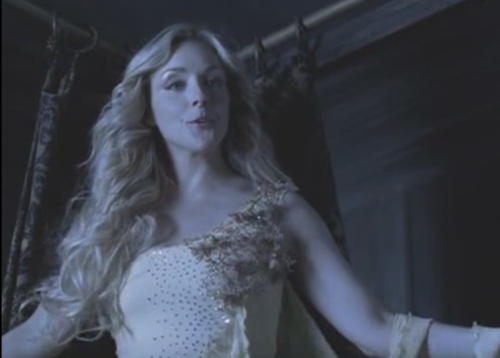 We’re straight into another song. How did Alan Menken find the time to write this? Between 1989 and 1997 he wrote TEN musicals. Ten INCREDIBLY SUCCESSFUL full musicals.

Scrooge’s dad is called John William Scrooge which sucks and is nowhere near as cool a name as Silas. He gets carted away to a debtor’s prison and warns Ebenezer (and only Ebenezer) to save his pennies and make his fortune, then keep it. Fan and their mother get ANOTHER song and we’re told they both later died. Kelsey’s Scrooge has barely said anything so far this entire film. At all. Not even in song.

Fezziwig’s party. Another huge dance number and another indistinguishable song.

Marley dies the fuck in front of Scrooge. 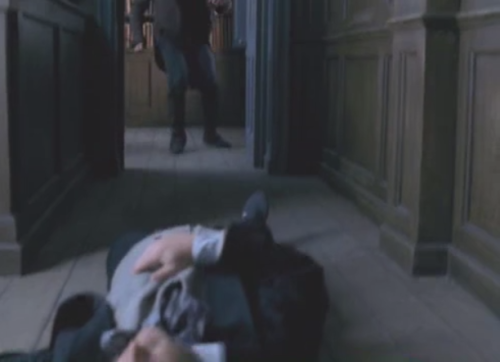 50 minutes in, out of a total of 87, and we have JUST finished with the Ghost of Past. The Ghost of Present is the black guy from earlier. He says to Scrooge “You’ve never seen the likes of me before”. In Victorian London, I sincerely doubt it. 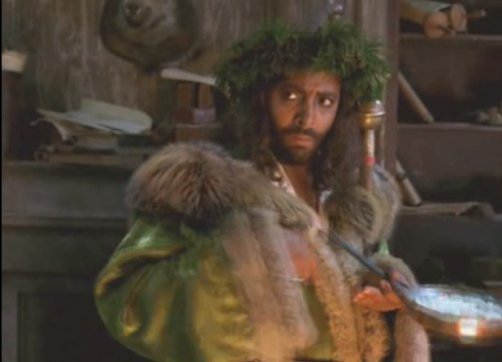 All of Present’s stuff is done in the form a Music Hall number in which Scrooge is humiliated on stage. I do not understand what this accomplishes for his reclamation. 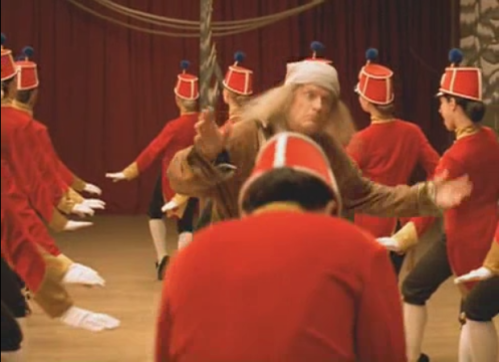 Whoa, we’re getting Ignorance and Want in this happy, upbeat musical? Ok. 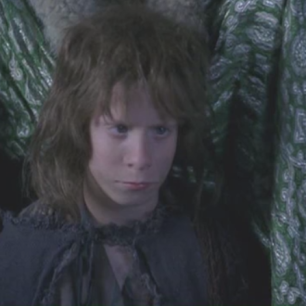 Are those kids disabled? Christ… I do not know how ethical this is. Let’s look at the original description of Ignorance and Want to try and divine what the filmmakers were thinking.

“They were a boy and girl. Yellow, meagre, ragged, scowling, wolfish; but prostrate, too, in their humility. Where graceful youth should have filled their features out, and touched them with its freshest tints, a stale and shrivelled hand, like that of age, had pinched, and twisted them, and pulled them into shreds. Where angels might have sat enthroned, devils lurked, and glared out menacing. No change, no degradation, no perversion of humanity, in any grade, through all the mysteries of wonderful creation, has monsters half so horrible and dread.”

I think this might’ve been one of the most tasteless decisions to have been made in a film this Chradvent. I don’t like it.

The Future Ghost is the blind woman from earlier who wastes no time in transforming into the White Witch. 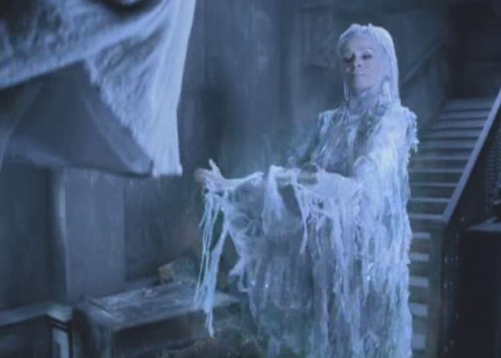 The “silent ghost” thing that they’re going for is undermined by the character speaking and singing at the beginning of the movie. They head straight to the graveyard where we get our fifth, sixth or possibly tenth all-cast musical number. 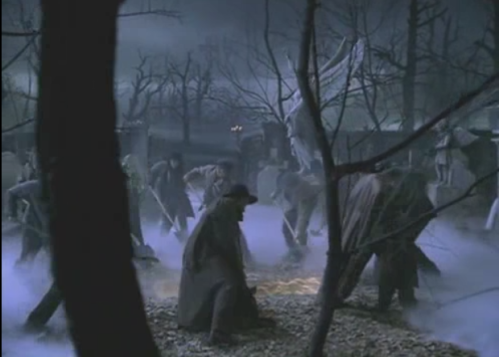 I cannot get over how fucking stupid Scrooge is. The completely indistinguishable song they’re singing is filled with lyrics about how Scrooge specifically is going to die and we even see his bloated grey corpse. 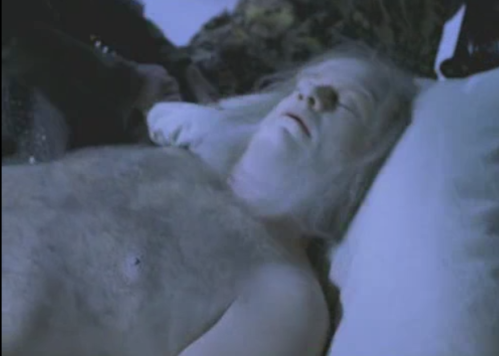 Still he doesn’t get it.

Eventually, he sees his gravestone and gets it. I felt nothing here, we don’t really know this Scrooge because we spent too much time watching dance numbers. Albert Finney didn’t have this problem.

The stone table breaks in two and Scrooge wakes up. 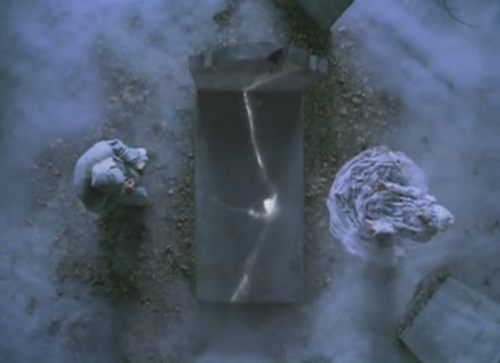 The first thing he does is grab a caroler and pull him indoors. His friend immediately runs away and Scrooge starts garbling about ghosts. The boy doesn’t look too happy about this. 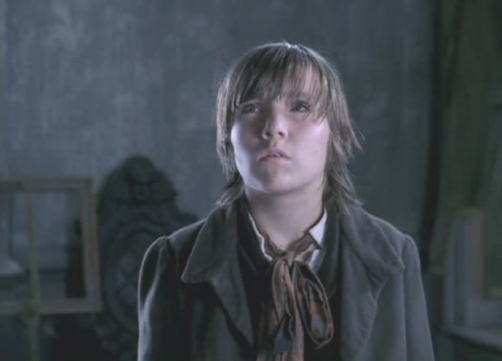 Two gold sovereigns are pressed into his hand and they’re off to the butchers. Questions later.

This is the first time I’ve noticed Scrooge’s ponytail, eurgh. I bet he’s into body pillows. 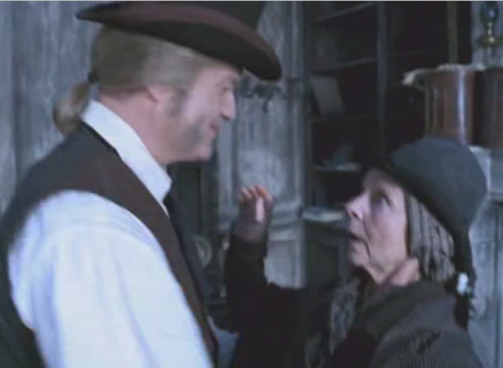 Scrooge kills Bob with the turkey and the film ends. 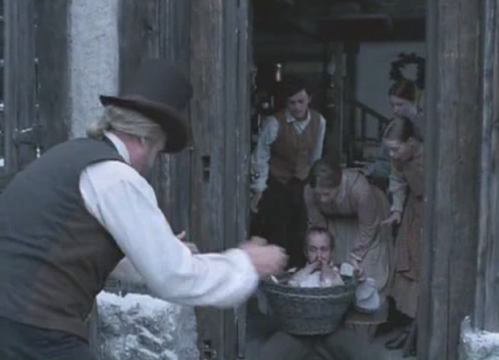 What a shame. I had such high hopes for this one. Oh well. I’m fairly confident that tomorrow’s will be worse.